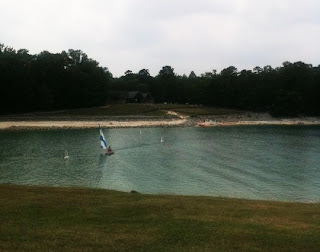 the second day of my little carolina adventure was one of endless activity. the day began early, as we were headed to transylvania county to do some hiking & waterfall-visiting. we drove about an hour north, crossing the state line into north carolina. being avid bbq-lovers, we stopped along the road at hawg wild bar-b-que in brevard (a really cute little town). after our feast, we began the ascent of a winding road (our ears were popping the whole time) up to caesar's head, where we found breathtaking views & beautiful greenery, although it was a bit foggy.
then, it was on to looking glass falls. i should mention that, by now, we were cruising around in a cool 76 degrees, a welcome change from the humidity-laden 100+ i had been enduring in scorching louisiana. when we got to the falls, we walked down a pathway & some stone steps to reach  the base of the waterfall, where countless people were swimming and exploring. the sight of huge cliffs above and cool water below was both refreshing & soothing.
we then made our way over to sliding rock, which was quite a sight to see! as we watched people careen down the slick rockface & splash into the waiting water, i wished desperately that we had thought to bring towels along with us. we decided that we would leave a reason to come back (and i hope we will)! then, as we jumped back into the tahoe, we decided to drive by lakes jocassee & keowee, where many inhabitants of north & south carolina set up their lake house residences. the views were beautiful, as seen in the photo above (i love that i captured the little sail boat)!
after the excitement of  the day, we checked into our downtown greenville hotel & took a much-needed nap before heading out on the town for some italian cuisine at trio with alex & ashley. then, it was on to the community tap, where we picked up a few growlers to take over to john & lisa's. after a few drinks & some intriguing conversation, we headed back into downtown for a few more drinks & a game of darts, before we retired for the night.
it was so nice to meet & hang out with everyone justin had been spending time with while on his preceptorship, & if i needed any more reason to fall in love with greenville, this day definitely did the job.
(photo: my iphone)
at August 16, 2011

this sounds like such a lovely day! especially the sliding rock - too bad you didn't bring towels!

giveaway going on now, check it out! 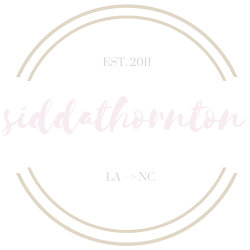