the beauty of early-morning wake-ups. 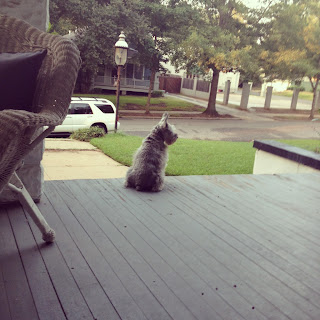 it's no secret: i am not a morning person by nature. i am relatively zombie-like any time before 10 o'clock, & one of the only things that helps to counteract this phenomenon shouldn't come as a surprise. (it's coffee).

but - as of late - when i've risen before even the hour of six has struck & met with jessica for a run at betty virginia park, i've noticed a marked difference in the way i feel later in the day. and hint: it's not exhaustion. it's rejuvenation & peace that i'm feeling on these early rise days.

and you know, i think a lot of it has to do with porch dates with mollie jean. because on days wheni get up early & run with jessica, once i'm home,i can make a cup of coffee & sit outside for a while, during the time when the world is still quiet & still. i may even choose that time to catch up on social media or news, since i'm finding i have less & less time for that recently (which makes me unvelievably sad).

as i sat on the porch for just such a morning yesterday, i thought to myself - for a fleeting moment - how much happier & centered i'd be if i were to rise before that six o'clock mark every day. i call the thought fleeting, even though it wasn't. i'm still thinking about it now. and maybe - just maybe - that will mean i'm ready to commit to a change.

i've tried it approximately one thousand times before, without success.

but change has to start somewhere, doesn't it? if we try long enough, eventually we'll succeed, right?

Melissa said…
I think if you're already thinking that you're feeling better, then you're on the right track to getting up early every morning. I just love this post, as I feel the same way whenever I attend fitness classes. XO!
August 8, 2012 at 9:41 AM

Unknown said…
I so wish I was an early rise (and a runner...). What a lovely way to start the day! I hope you can keep it up Lauren :)

Popular posts from this blog

July 27, 2011
Hello! And welcome to siddathornton.
My name is Lauren. I am 29 years old. Here are a few random factoids about me & my life...
- I'm originally from Louisiana, but I live in North Carolina with my husband, Justin. We aren't from New Orleans. Every time we tell someone we're from Louisiana, this is immediately what they assume. We actually come from a town in northwest Louisiana - Shreveport - which may as well be Texas, it's so close to the state line.
- Due to my love of the written word, I majored in Journalism at Louisiana Tech University. Tech is located in the quaint town of Ruston, Louisiana, and I like to think that attending college in a small town shaped much of who I am today. And as much as I would have liked the overly-romaticized dream of becoming a professional writer to have come to fruition for me, I'm in the midst of a career change, via occupational therapy school.
- There are a few things for which I have an unhealthy obsession: reading, co…
4 comments
Read more

July 08, 2018
beautiful flowers all around vail
readingFierce, by Aly Raisman. A couple of weeks ago, I finally finished Big Little Lies, by Liane Moriarty, which I really enjoyed.
writing a lot in my bullet journal, including adding photos and keepsakes. It's been a while since I've done this kind of journaling, and it really is my favorite.
listening to the Office while typing out this blog post. Nothing makes me feel better like this show does.
thinking that I am really glad that Justin and I built in some trip recovery time on the back end of our trek to Colorado. It really does take some time to get re-acclimated to the time zone you've returned to. We've both been feeling so tired since we got back.
smelling coffee and donuts. The breakfast of champions.
wishing for some tortilla soup today. I had some at a place called Hacienda Colorado in Denver. It was so good, and I've been craving it ever since.
hoping for a productive and joyful week ahead.
wearing pajamas, just like I have …
Post a Comment
Read more

July 31, 2011
When I started blogging on siddathornton back in July of 2011, the beginning of my currently posts wasn't far off. I've long enjoyed compiling lists of what's going on in the moment, but I never thought about making it a link-up or an always-on-Sundays thing until September 16, 2012. As you can read in that post, I was elated, due to the responses I was getting from other bloggers, letting me know that they, too were doing "currently" posts and had decided to dedicate the writing of them to Sundays each week. Thus, The Sunday Currently was born, and I have currently penned over 100 posts, some with over 50 people linking up and sharing what they're up to, too. If you feel so inclined, please join! Let's celebrate the little moments of our lives that we never want to forget.